Right-wingers oppose state-provided social programs like education, health, and welfare services on the grounds that they create powerful and wasteful new bureaucracies. But it’s means-tested benefits, not universal programs, that empower bureaucrats to act like petty tyrants.

We have seen that in New Zealand with the delivery of welfare benefits to the unemployed and sole parents and income support through the tax system for low-income families with Working for Families.

Benefits in New Zealand are very low and cannot meet people’s basic needs. That has been confirwed by the government’s own Welfare Expert Advisory Group in their report.

It is simply a lie when people claim that benefit levels being “too high” encourages people to choose benefits over jobs. Levels of unemployment were much lower in the period from the 1960s to the 1980s when benefits were twice as high in relation to average wages than they are today.

The real value of benefits in relation to average wages has been halved since the 1990s and the hugely unpopular “Mother of All Budgets” in 1991.

Prior to the cuts in 1991 around 25% of children in beneficiary families were identified as poor in the Household Economic Survey. That rose to 75% post cuts and hasn’t changed much since.

But, only half of the cut in the value of benefits in relation to the average wage was due to Ruth Ricardson’s budget in 1991. The rest came as a consequence of both National and Labour only increasing benefits by the Consumer Price Index rather than average wages for the next three decades. This only changed in 2020 when benefit increases were restored to being in line with the average wage movement again.

The poverty produced by this cut is real and felt and can’t be discounted as simply the result of a “relative” decline. 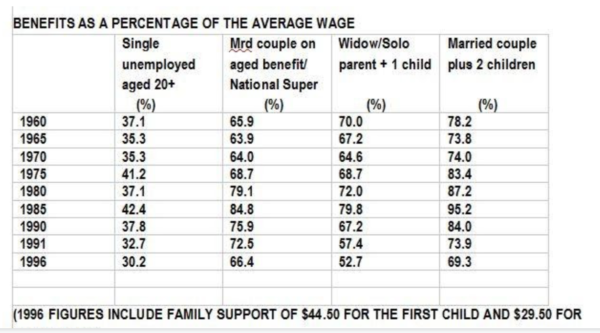 The value of the benefit for people on National Superannuation was also cut in 1991 but its value in relation to the average wage was maintained at 72% for a couple.

To justify these cuts (and the refusal of future Labour-led governments to reverse them) a whole ideology around “deserving” and “undeserving” poor has been developed. Anyone who is not working is deemed a “bludger”. Cartoons of overweight brown people queueing up for any handout available became almost normalised.

Assistance is targeted to those deserving people in work through Working for Families.

Universal entitlements like the family benefit were eliminated so assistance could be targeted to the deserving more accurately.

The system became one where seeking assistance became more and more difficult, humiliating, and vindictive.

The economic recession that was partly induced by the 1991 welfare cuts saw unemployment go from less than 4 % to 11% on average. But for those of Māori or Pasifika descent, the recession was a depression with unemployment reaching 25% and whole communities shattered.

Anti-union laws were imposed during the crisis and union protections were removed for most private-sector workers. Real wages were slashed.

Prior to this recession, Māori and Pasifika had higher labour force participation rates than did Pakeha. That was before the infection of these communities by a mass virus of laziness that saw tens of thousands of them quit work over just a few years.

Full-time male employment fell by 120,000 over four years from 1987-91. Of course, this impacted much more on Māori and Pasifika. Working-class communities and families were torn inside out and upside down.

To compensate for the loss of real income families worked more hours. Two-parent families with both working full time doubled from 20% in the 1980s to 42% of all families.

Another 28% of families today had a parent working part time.

A report by Simon Collins in the New Zealand Herald November 25, 2006, found that average family income in 2001 in constant dollars was the same as in 1981 despite the fact that the proportion of women working went from 47% to 61% and the percentage of families working 50+ hours a week went from half to two-thirds.

It was also during the last few years of the 1999-2008 Labour-led government that WINZ radically reduced the percentage of people receiving welfare support from the State.

In the mid-2000s WINZ imposed a culture of denial that saw a halving in the percentage of unemployed people accessing benefits. Many had no choice but to to try and survive with no income at all, rather than face ritual humiliation, belittling and bullying from caseworkers.

No explanation has ever been provided as to this was achieved.

A billion dollars taken out of working class communities

People receiving a benefit as a percentage of the working-age population fell from 13% to 8% when unemployment only fell on average from 8% to 6%. I am convinced the big growth in homelessness since 2008 is directly related to that policy of excluding people from even their minimum entitlements. Getting that 3% of the working-age population (about 110,000 people) off benefits essentially has just removed about a billion dollars a year from working-class communities.

It is reflected in overcrowded homes, people living in garages or on the street, kids staying at home longer, poor health, poor nutrition. That billion dollars saved isn’t going to the likes of you and me. It is being used by a big business-friendly Government to hand out favours to their friends. And of course, there is always enough for the police, prisons, military, and spies to protect their system.

These numbers are behind the hunger and homelessness associated with joblessness over the last seven years when unemployment was officially relatively low. But if you were unemployed and couldn’t access any form of entitlement then misery was the inevitable result.

This is also the reason beneficiary recipients have seen their debt to the Ministry Of Social Development (MSD) triple from $250 million to $750 million since 2008. These debts are then used to bully and harass people further including imposing addiitional penalties if not repaid on time. 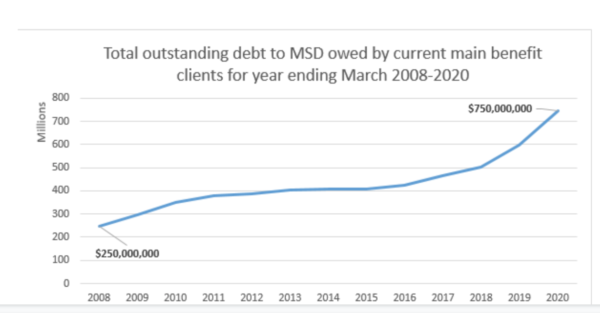 The system of denial and treating working people accessing income support (working or not) as potential frauds or bludgers continues.

This contrasts with how tax avoiders or wage subsidy recipients are treated.

The different treatment of tax avoiders was highlighted in a Victoria University research paper titled: “Why is tax evasion treated more gently than benefit fraud?”

Bernard Hickey in the Spinoff article headed “The real impact of New Zealand’s economic response to Covid-19” looks at the big capitalist recipients of wage subsidies and how they are treated for potential fraud:

So far, only one reported prosecution has been launched by MSD against those who took the money without justification, out of over 1,000 cases referred for investigation. During that time, MSD has launched dozens of prosecutions against beneficiaries.

The biggest losers in the Covid recovery have been those in itinerant work or piecemeal work, who have lost income, along with those renting. Last year those on benefits and the working poor received benefit increases that were not enough to cover rent increases. Last year they received a doubling of the winter energy payment, but not this year.

The government announced earlier this month it would lift the incomes of 346,000 families by an average of $20 a week with various increases in best start payments and higher tax credits, but only from April next year. The PM said it would lift 6,000 children out of poverty. It is costing $68m a year for the next four years. Just imagine what $20b worth of cash paid to increase benefits, let alone to invest in housing and infrastructure, would have done to reduce child poverty.

Last month, MSD minister Carmel Sepuloni announced an extra $9.6m in hardship assistance for low income workers, although some of it can be clawed back at a later date.

Child poverty activists have described the recent one-off grants and tax credits, some of which are clawed back as recipient incomes rise, as disappointing and out of touch.

That has been reflected in massive increases in demand for food parcels and a rise in debt owed by beneficiaries to MSD. As of March 2020, 67% of beneficiaries owed an average of $3,600 in debt to MSD, with debt rising $150m to $750m in the year to March, 2020. The Govt has rejected suggestions of an MSD debt moratorium or writeoff.

Finally, we have the New Zealand Herald look at Working for Families in an article headed “Welfare debts pushing thousands into ‘poverty trap’”. Thomas Coughlan writes:

The Government is collecting tens of millions of dollars worth of penalties and interest on debt owed by some of the poorest Kiwis.

As of September 30, Kiwis owed the Government $193.2 million from being overpaid working for families tax credits – usually because they have not notified MSD that their family circumstances have changed.

Payments vary depending on whether someone is in a relationship or is living with children of a certain age. If the Government is not kept abreast of a person’s changing personal status, that person might be overpaid any benefits or tax credits they receive- the Government will then treat the overpayment as debt, and try to claw it back, in some cases with interest.

More than a quarter of debt relating to working for families ($54 million) is actually not the overpayments themselves – it is the penalties and interest charged on that debt.

The evidence is that if the jobs are available nearly everyone who wants to will work. Māori and Pasifika don’t have a wefare gene. In fact, they had a higher work participation rate than Pakeha before the 1990s restructuring of capitalism imposed endemic unemployment.

But low benefits do force people into taking the worst jobs on offer more quickly than would otherwise be the case. Higher benefits suit workers better because it gives us a little more bargaining power when negotiating our next job after losing one. That is why it is wrong for the CTU to be negotiating a new social insurance system of benefits for regularly employed people instead of fighting for higher benefits for everyone. That undermines working-class solidarity and power.

Cutting benefits went hand in hand with cutting union power and lowering real wages. That is why they destroyed collective bargaining and union representation for most workers at the same time.

But to cut real wages the employer thinks he needs the gap to grow between wages and welfare payments. You have to make living on a benefit as miserable as possible.

One of the worst things that has been done by the this Labour government has been to maintain the unequal position for parents in work or those not in work in terms of child support payments. The In Work Tax Credit is a payment of up to $72.50 per week ($3,770 per year) to working families for the first three children and up to $15 extra a week for each additional child. In work parents get $72.50 a week more. This is taken off them if they work less than 20 hours a week for a sole parent or 30 hours a week for a couple and rely on a benefit for support. Managing the boundary between being entitled and not entitled is a nightmare. The work requirement was suspended for the Covid emergency but could be returned anytime. The Child Poverty Action group has critiqued it as a failed way to deal with child poverty from day one.

We should demand a returning of benefit rates to 40% of the average wage for the adult unemployment benefit, an individual entitlement to benefits. This level of suppport with individual benefits was provided as a Covid welfare payment last year. The adult age should be returned to 18 from 25. Child support payments should be universal for all parents and not mean-tested.

That will fix the system not social insurance for the regularly employed. Then we can retrain the thousands of WINZ staff dedicated to denying entiiitlements and prosecuting welfare recipients into a much more worthwhile and useful job.